Antonio Marra was born in 1959 in Volturara Irpina (Italy) and grew up in Naples. He completed his studies from 1974 – 1979 and graduated with the “Diploma di Geometra”. After attending the Accademia di belle Arti in Naples from 1980-82, Marra devoted himself to a painting technique which he perfected over the years to such an extent that it can be considered unique with its amazing three-dimensional effects. The break with the usual viewing habits is created by a line relief on the canvas, which he paints on both sides. Thus, depending on the viewpoint and angle of the viewer, his pictures are given several levels, whose basic patterns are virtuously interwoven and harmoniously harmonize opposites. The artist lives and works in Offenbach and designed the much-acclaimed façade of the “Marra-Haus” in Heilbronn in 2015.

Born in Duisburg in 1953, Harald Schmitz-Schmelzer studied at the Düsseldorf Art Academy from 1973 to 1981. After a short period as a lecturer, he lived and worked as a freelancer in Mülheim an der Ruhr, where he died the 3. December 2019. ” Harald’s intense involvement with things that inspired him and his passion for collecting exclusive woods are reflected in his diverse works. The worldwide travels, which were very important for him, and the impressions, the forms and colours of the “foreign worlds” collected during these travels, become tangible in his works” ( Marlene and Lena Schmelzer)

Susanne Ackermann was born in Oldenburg in 1962. From 1988 to 1993 she studied at the Karlsruhe Art Academy. She received scholarships among others in 1995 by the Kunststiftung BW, in 1996 by the state of Baden-Württemberg; in 1999 she was awarded the Cité Internationale des Arts in Paris, in 2011 she was awarded the Hanna Nagel Prize. Susanne Ackermann says about her work: “It’s about structures that I build up. I am most satisfied when the structure is very simple and then staggered in such a way that a complicated and interesting space is created. That’s the idea. They are very simple forms that, by being superimposed and positioned on the canvas, acquire a tension and are given something spatial. Is there a depth, a multi-layeredness? Maybe something like enigma?” 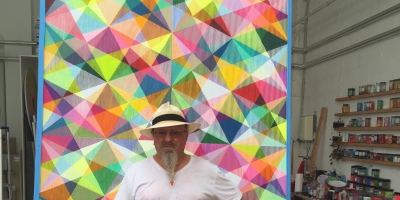 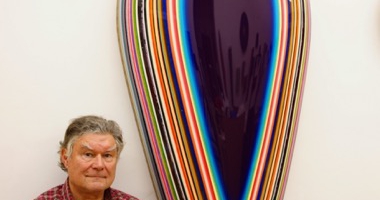